ARE YOU MY MOTHER?

Philip Dey Eastman, better known to many readers as P.D. Eastman, wrote and illustrated Are You My Mother? The book has sold millions of copies, is available as easy reading board and cloth books, videos, plays and has been translated to several other languages including Spanish. P.D. Eastman worked at the Walt Disney Studios and the Warner Brothers cartoon unit prior to induction in the Army in 1942. He was assigned to the unit that produced the Private Snafu series and was in the company of many now famous writers and cartoonists. Other titles by P.D. Eastman are Sam and the Firefly, Go, Dog. Go! and A Fish Out of Water.

Are You My Mother? was published in 1960 by Random House and features a bird of nondescript species on a search to find his mother. Mother bird feels her egg moving beneath her and decides she needs to get something for her baby to eat when it hatches. She leaves the nest and while away, the bird hatches and then decides that he must find his mother. He cannot fly and falls out of the nest and literally walks right by mother bird as his search begins. Baby bird is introduced to a number of characters, living and non-living that are NOT his mother. Exasperated he says to himself,

A longer read than many books at this level with 72 pages, young readers find the character endearing and the search captivating. Some are put off by the lack of full color but the bird’s determination made this story one of School Library Journal’s Top 100 Picture Books (2012). I started this collage several months ago and I would be remiss if I did not say it took on new meaning of late when George Floyd called out for his mother as he took his last breaths of life. An underlying theme of having a mother has lead me to some very interesting discussions with my students about their mothers. I’ve had students share that they have two mothers, or their grandmother or father is their mother too. Mother is a biological being but the essence is that person that cares for you. The importance of someone in their life that serves this roll. To parents and teachers that read this book with young children it can be a very playful book, but also be aware that for some children talking about a mother can cause some conflict. 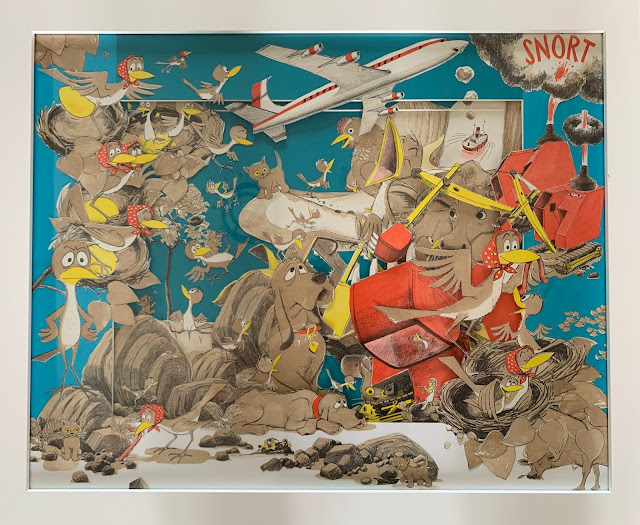 NOTE: It’s been a long year since my last post and collage. I had both my hips replaced and standing, sitting and bending over my art table was something I had to ease into. Thanks to my ace surgeon and physical therapist I am doing better than ever. The year was made even longer with Covid and it's been a little frustrating to not be able to participate physically in the Black Lives Matter protests but I stand with the protestors, "Black Lives Matter."

UNDER THE BIG TOP 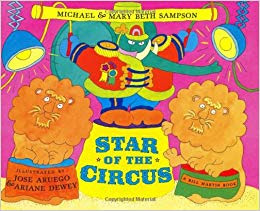 STAR OF THE CIRCUS by Michael & Mary Beth Sampson, illustrated by Jose Aruego & Ariane Dewey, is a delightful story of circus performers who each claim that they are the stars of the circus. Marvelous Mouse, Cannonball Cat, Dazzling Dog, Crazy Kangaroo, Zany Zebra and Big Bear are under one big top presided over by Elegant Elephant. The book has all the elements of a great pre-school read aloud where there is repetition of dialogue and bright, vibrant illustrations. After a silly turn of events, the performers realize by the end of the story that “we are all stars of the circus.”

While this book was in extreme disrepair, (criteria for use in my collages) it called to me for a couple of other reasons. The relatively recent demise of the “Greatest Show on Earth,” where after 146 years the Ringling Brothers and Barnum and Bailey Circus folded and the ever evolving realization and understanding in our society that using animals for our entertainment as cruel and inhumane. It occurred to me as I looked through this book that the idea that a circus might include animals dressed in show clothes doing tricks would be as outrageous as me telling my students that we used to have to go in a booth and insert coins to a box with a corded handset to get in touch with another person. Change is good, but so too were the illustrations of the team of Jose Aruego and Ariene Dewey. No animals were hurt in the making of this collage, so please enjoy. Under The Big Top is available for purchase and could easily travel to your destination. 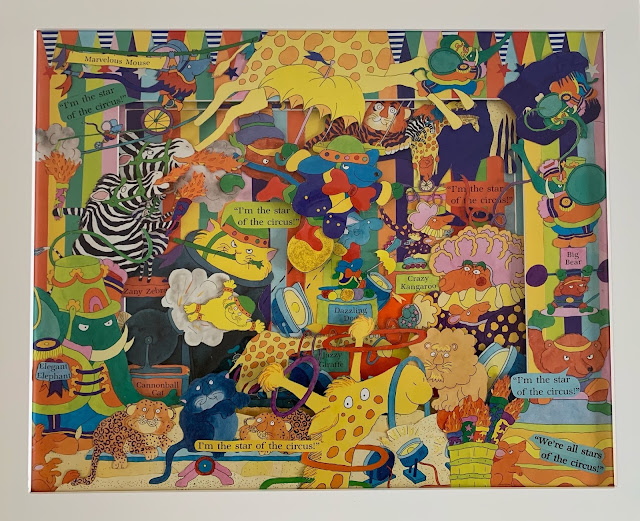 THINKING OUTSIDE NOT A BOX!


My latest collage available for purchase is pictured below and based on the book Not A Box. Creating this collage was a challenge that I wasn’t expecting. You could say I was a bit "boxed in" - ok I'll stop now. When deconstructing and reconstructing a damaged book I follow a process that I designed when I first started making collages from damaged books. I detailed the process in my September 22, 2017 blog post. So why was this one a challenge? Most of the books I've recycled to date have stories with a beginning, middle, and end even if some pages are damaged beyond use a book I select to collage must have enough elements intact to stay true to the process. I struggled with my collage of Not A Box until I approached the piece/story as a concept and not a progressive arch. When I first selected this damaged book I thought I would I would have a little "quick" fun with a relatively common shape - the rectangle, on occasion a square, but I was not prepared for the amount of time that this collage tested my artistic sense and then - I was done! 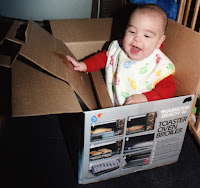 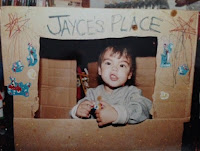 Not A Box by Antoinette Portis, a Theodore Seuss Geisel Honor Award Winner, celebrates imagination and creativity in her book inspired by her own memories of her and her sister sitting in a box in their driveway.

Boxes hold a special place in my heart and I have many fond memories of box inspired imaginative play as a child, parent and teacher. I remember my son's first Christmas when my mother-in-law gave him a wonderful and appropriate baby toy (don't remember it) but he (and we) were all memorized and captivated by his amusement in the empty toaster oven box from the gift we received. Over the years my son, nieces and nephews, students and even family pets enjoyed the many hours of imaginative play and fun a box provides. Below, second graders inspired by the book Second-Grade Friends by Miriam Cohen make life sized cards.

As we approach the "season of giving" I encourage all to remember that books are not only presents you can open again and again, but reading with another person no matter the relation also makes memories to cherish.  Inbox me to buy the collage. Click on the book caption above to buy the book. I have yet to qualify for any cash back for book sales, but the links have been monetized. I present the NOT A BOX! Collage, enjoy.

IN THE NEWS, CORDUROY

I am pleased and humbled to report that Corduroy has a new home! Corduroy went on a journey to the nation's capital this summer and the Collage is no longer available.


In other exciting news, Corduroy Takes a Bow, a new book by Academy Award winner Viola Davis is now available.

Based on the character created by Dan Freeman, Ms. Davis writes her first book about Lisa taking Corduroy to the theater.

Read or listen to Ms. Davis on NPR talk about the importance of reading and her experience of writing the sequel.

NOT A BOX COMING TOGETHER

I should have known that this book was going to challenge me with possibilities but I think you will agree it's getting there! I've had lots of fun playing with texture, shape and pattern. The first picture is absolutely too busy. I love the patterns and am trying to find the best place for each box transformation. 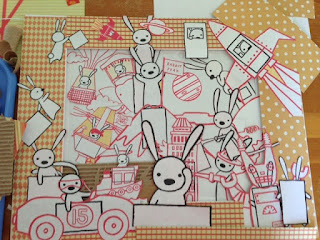 In this next iteration I've decided on less pattern and more cardboard. Still too busy. 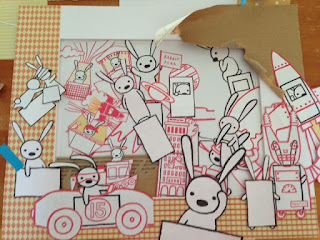 Do you see it coming together? Have you read the book yet? I hope so... 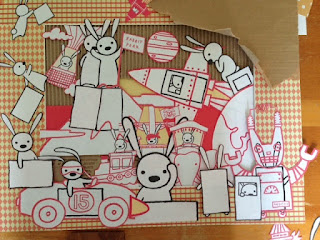 Where will this end up? I'm not sure but I will let you know how it all turns out. 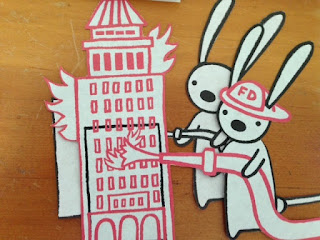 My latest Recycled Story is based on the book Not A Box winner of a Theodor Seuss Geisel Honor Award. I love this book and so do my students. I always try to have several different sized boxes for them to explore and play with when I read this story. 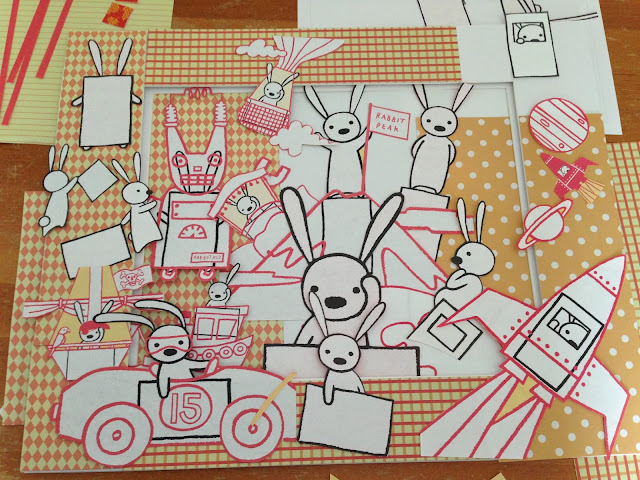 For my collage I thought I might add some origami paper for texture. Check back in a few weeks and we'll see how this Recycled Story turns out!


The Recycled Story I share with you today is the 1997 Caldecott Honor Book Hush! The story is a Thai Lullaby by Minfong Ho with pictures by Holly Meade. I hope my collage evokes the energetic persistence of the dutiful and caring mother who requests that a small mosquito, a long-tailed lizard, a lean black cat, a fat gray mouse, a bright green frog, a muddy fat pig, the glossy white duck, a loose-limbed monkey, an old water buffalo and a great big elephant be quiet so that her baby can sleep. The rhyme and repetition are great for preK/K story time.


Holly Meade’s illustrations capture the beauty and simplicity of the Thai home and the many “neighbors” that could disrupt the sleeping baby. Ultimately there is quiet and mother dozes off in the stillness at the windowsill.

“Nothing’s stirring,
not a breeze,
As the moon drifts
up above the trees.
There is no noise now,
there is no sound.

Only Baby’s wide awake,
his eyes bright and round.”

Ms. M
Welcome! My name is Lisa McNulty aka Ms. M. I am an educator and ALL of my pursuits involve education, reading, writing and art. I'm passionate about reading and media and use my blogs to share my purpose and opinions. Please note: If you purchase a recommended book through this site I may earn an affiliate commission.